Flu season in Australia is generally from May through October, with a peak in August. Over the last couple of weeks, several people have cancelled appointments with us due to the flu. We have also noticed more people with the flu late this season rather than earlier, so we thought it wise to revisit the subject. Preventing flu by using crystal elixir may well save the aggravation of putting up with its symptoms this season.

Prevention of course is much better than cure; so do consider the following:

Several years ago the Equine influenza was raging here in Australia. Every horse in the area where we live had the flu and most were in quarantine for several weeks and some for months. Yet our horse was the only one not to get infected. Why? We gave him a crystal elixir to boost his immunity and to prevent flu. We made it using Carnelian, Clear Quartz, Bloodstone, Moss Agate, and Gold and given to him twice a day with his food. 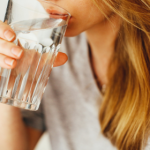 An Elixir to Prevent Flu.

The use of an elixir could be an excellent way of providing some protection for yourself and family. If you don’t know how to make an elixir, go to our article on ‘Making Crystal Elixirs’.

To prevent flu, try an elixir of Fluorite, Moss Agate, and to give it an extra boost add Clear Quartz.

To boost your immune system, try an elixir of Bloodstone, Ametrine, Carnelian, and Clear Quartz. Optionally you may add Gold (I use my wedding ring), Moss Agate, or Mookaite.

If you already have the flu, a good elixir to help get over it is Rhodochrosite, Blue Lace Agate, and Amethyst.

Of course, each of these stones may be used individually, or you may develop your own combination. I prefer to make a fresh batch each day for as long as required, however, you can make a larger supply and store it for a few days in the refrigerator. (Elixirs do lose their potency, so consume them as fresh as possible).

Another useful strategy is to transfer some of your elixir into a spray bottle and use it to spritz yourself as needed throughout the day. Carrying a couple of the above stones may not go astray either.