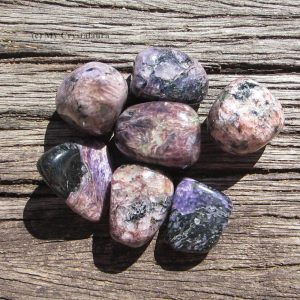 Charoite is an unusual and rare crystal. It was first described in 1978 and named for the Chara River in Russia. Charoite is translucent lavender to purple in colour with white, grey and black veining along with a pearly lustre. It is a discrete mineral rather than a rock. Usually found in massive forms, it has an unusual swirling fibrous appearance. It is sometimes chatoyant, and this along with its intense colour, has led many to believe initially that it is synthetic or artificially enhanced. It belongs to the monoclinic crystal system with a Mohs hardness of 5 – 6.

Furthermore, it formed from the alteration of limestone by the close presence of a syenite* intrusion. Heat, pressure and more importantly, infusion of unique chemicals into the rock is then responsible for its transformation to Charoite.

The Russians first discovered Charoite in 1947, along the Chary River at Aldan in Russia. An area reputed for its forbidding climate and terrain. However, it remained unknown in the West until 1978. Believed to be opaque and unattractive when found in the field. This fact may have contributed to its late recognition.

Why it is not found in other locations is not fully understood. But it is probably due to the combination of unique limestone reacting with a chemically distinctive intrusion and subjected to exceptional physical conditions of its location. Charoite has been used both as an ornamental stone and as a gemstone.

Because Charoite comes from an area of Siberia once associated with political prisoners it has become a symbol of endurance and comfort in times of adversity; especially for anyone in prison or in residential care from boarding school to hospital. It gives the courage to start over again after a serious setback.

Charoite is known as both a “Stone of Transformation” and a “Stone for Courage” and is truly a stone for this age.

A soul stone with deep physical and emotional healing energies. Also used to overcome fears. It transmutes negativity and cleanses the aura and allows alignment with your soul’s purpose. Charoite stimulates your inner vision and spiritual insight and handles enormous change at the spiritual level. It facilitates this by fostering a synthesis between the heart and crown chakra, helping you walk your spiritual path with awareness, and manifest your soul’s wisdom and light in your daily life.

It can bring insightful visions of past lives and suggest ways to redress personal and collective karma. Helps to bring us closer to spirit, by showing us that everything, even the thoughts we hold as true, can be dissolved and replaced with more empowering energies.

Charoite is useful for overcoming obsessions and compulsions. Grounds the spiritual self, opening and balancing the crown chakra and assists in overcoming a sense of alienation or frustration. It releases deep-seated fears and is useful for overcoming resistance or putting things into perspective. It is able to bring about a relaxed attitude, reduce stress and worry and bestow drive, vigour and spontaneity. This stone is useful for cleansing and purification of your energy body as well as for the transmutation of negative energies within you.

This stone is able to help those driven by the thoughts and programs of others rather than their own, and stimulate perceptive observation and analysis and then apply these to facilitate a fast decision.

Charoite transforms negative energy into healing and exchanges wellness for disease. Lifts your energy and helps overcome exhaustion. Also assists with deep sleep and powerful dreams, gives calm sleep to children, overcomes insomnia. Put Charoite beneath your pillow, especially if you are prone to disturbed sleep or fears that surface in dreams.

It regulates blood pressure, treats the eyes, heart, liver and pancreas. Reverses damage caused by alcohol, and alleviates cramps, aches and pains. It is helpful where autonomic nervous system dysfunction is affecting the heart. It also helps to heal autism, bipolar disorders, Asperger’s syndrome and ADHD.

*Syenite is a coarse-grained intrusive igneous rock of the same general composition as granite but with the Quartz either absent or present in relatively small amounts. The feldspar component of syenite is predominantly alkaline in character (usually orthoclase).

First presented in the December 2010 Newsletter, and edited August ’22 for inclusion here.