Another Crystals and Kids Story — Madison

Seven-year-old Madison knows her stuff . . . Thanks To Her Clear Quartz Crystal. Madison is one of our young customers and could have been featured in one of our previous articles about ‘Crystals and Kids’. However here she gets her own: Madison—Another Crystals and Kids Story. Over the years we have been fortunate to get to know Madison and her grandmother. Madison has developed her love for crystals and healing from her grandmother, along with a little bit of encouragement from us. She treasures her copy of our book and uses it as her main reference. For a little while, after she first got it, it was even kept under her pillow and read from nightly.

As well as all her ‘pretty crystals’, she actually has her own healing crystal collection and knows the basics of crystal healing. In addition, she absolutely loves getting people onto her healing table and ‘fixing’ them with her crystals. In fact, she comes up with some highly interesting and complex layouts, considering her age.

Recently, we were talking with Madison’s grandmother and she said she had to tell us about this story. Well, it’s more like two stories, but they are linked together. Madison’s father doesn’t hold the same values and beliefs when it comes to crystals and what he considers as woo woo stuff. However, he doesn’t discourage his daughter or his mother’s involvement. It is interesting though, how this incident changed his opinion somewhat and we will conclude with his story. Madison was having trouble with words at school. She recently got fifteen wrong in class. (We forgot to inquire if this was about spelling, or pronunciation, or maybe meanings). Whatever it was, the next week the class was having a word test and young Madison was a bit perplexed.

Thanks to Her Clear Quartz Crystal, Madison—Another Crystals and Kids Story continues

Her grandmother reminded her that doing her best and concentrating was what was important. Also that she could use her intention and a Clear Quartz crystal to help her get the words right.

So every night that week, she sat down with her list of words, her Clear Quartz crystal, and set her intention to know the words. She set off full of confidence on the morning of the test. When she arrived in class, she placed her crystal on her desk. When her teacher saw it, he asked her what it was. She replied that it was her special crystal and it was going to help her get all of her words right. She also asked him not to touch it as it was her special crystal and no one else should interfere with its program. Surprisingly, the teacher agreed and wished her luck.

When she got home that afternoon, she was busting to tell her parents that she got 15 out of 15 words right. She rang her grandmother and proudly announced that with the help of her crystal she got all of her words right. Her parents were surprised at the result as words were normally her weak spot. Madison however was pleased to declare that her intention and the crystal were what helped her get the words right. A magnificent result in any case. Buoyed by her success, she went on to give her father a lecture on how you can use crystals to help you out with all sorts of things.

This event must have sparked something in her father though.

A couple of days later while he was visiting his mother he picked up a Jet crystal. He then asked his mother if it could help him control his temper with a fellow employee. He explained that this man drove him nuts and he just wanted to punch him. 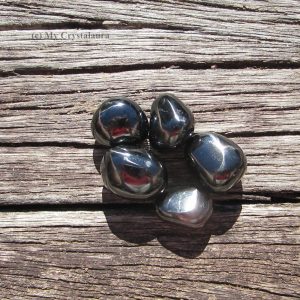 She simply asked him if he wanted it to. His reply was yes, but that isn’t what he said. He sort of implied that he was worried that if he did lose his cool and hit the idiot, he would lose his job. His mother’s response was to hand him a Hematite as well. She told him to keep one in each of his trouser pockets. She also told him that next time he was sure he would lose it, to put his hands in his pockets and hold onto them.

About a fortnight later and he rang his mother to ask, “What is it with these crystals?” Before she could respond, he announced that about a week back, the idiot had really riled him and he thought he was going to hit him for sure. But he did what she said. He put his hands in his pockets and took hold of the crystals. He couldn’t believe it as some strange energy overtook him and he found himself calmly telling the other man to go and pester someone else. Then he just turned around and walked away. He still can’t believe it, but the other fellow did just that. He feels sorry for the new bloke, but hey, he’s not angry or fearful of losing his job.

Madison, who had overheard the conversation, walked up to him and said. “If you want something you have to believe you can do it, and if you ask your crystal nicely, it will help you, just like grandma said it would.” Well – that stopped him right there!    Madison—another Crystals and Kids Story has some lessons we can all take notice of and learn by.