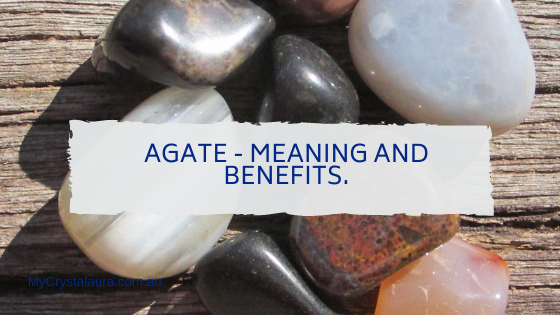 Agate. Here we will be concentrating on the generic qualities of Agate as there are so many different varieties.

Agate is a member of the Chalcedony family and has many variations. Nature has creatively coloured, striped and textured Agate, more so than any other. Agates have a Trigonal crystal structure and occur in nodular masses in rock such as volcanic lavas.  When split open, they often reveal an amazing variety of colours and patterns and a distinct banding that distinguishes them from other forms of Chalcedony (the compact, microcrystalline variety of Quartz).

It was one of the stones in the breastplate of the high priest. Legends that tell us that Persian magicians used Agate to divert storms. It was highly valued as a talisman or amulet in ancient times. It was also said to quench thirst and protect from fevers. Historically it was placed into the water used for cooking and drinking in order to dispel sickness.

Bowls crafted from Agate were popular during the Byzantine Empire. Collecting Agate bowls became common among European royalty during the Renaissance and many museums in Europe, including the Louvre, have spectacular examples.

Agate is an excellent stone for rebalancing and harmonising body, mind and spirit. It has the power to harmonise yin and yang, the positive and negative forces that hold the universe in place. It cleanses and stabilises the aura, eliminating and transforming negativity.  Agate enhances mental function, improving concentration, perception and analytical abilities. It soothes and calms, healing inner anger or tension and creates a sense of security and safety.

It is excellent for healing and improving relationships. This is because of its harmonizing qualities and its emotional energies of removing and releasing resentments and bitterness.

This is a very protective stone and is especially protecting for children.

Agate can cleanse and stabilize the aura by removing and/or transforming negative energy. It can strengthen the body and its connection to the earth. It also increases energy. Agate enhances healing of all kinds. It is particularly helpful with tooth and gum issues, strengthening sight, stomach problems, physical endurance, insomnia, strengthens the blood vessels, and is very useful for skin disorders.

Different types and colours of Agates will have additional properties to those above.