For all those born in the month of January, your Birthstone is Garnet. 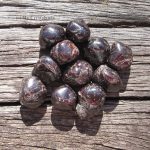 Garnet is very common and plentiful stone and can be found in many areas around the world. It has a trigonal crystal structure, and there are different forms according to its mineral base; Almandine, Andradite, Demantoid, Grossular, Hessonite, Pyrope, Rhodalite, Spessatite, Tsavorite and Uvarovite.  A common misconception is that all Garnets are a red, when actually they come in a wide variety of colours including purple, red, orange, yellow, green, brown and black.

Garnet has been widely known for thousands of years, and it has long been known as The Warriors Stone, carried by soldiers the world over as a talisman against death and injury, but it was also said to bring victory, peace and tranquillity. Many courageous travellers and explorers wore Garnets for protection, as they were considered popular talismans and protective stones.

It is said that Garnet not only holds the power to protect its wearer from negative energies, but to send those negative energies back to where they originated from. Garnet has been used as adornment for thousands of years and is one of the stones in the breastplate of the high priest.

Garnet is also a stone of romantic love and passion and commitment. Metaphysically it is used to enhance sensuality, sexuality and intimacy. It balances the sex drive and alleviates emotional disharmony. Red Garnet in particular stimulates the controlled rise of the Kundalini and aids sexual potency.

An excellent stone for manifestation and it can assist mystically with building your self-confidence as well as success in your chosen profession.  The Garnet is commonly known as the stone for successful business, and is useful in the planning stage of any project.

A Garnet placed under your pillow is said to prevent bad dreams. Wearing Garnet jewellery will help generate popularity amongst your peers, and help alleviate depression. It will also bring constancy to friendships.

Garnet has a strong link with the pituitary gland and can stimulate expanded awareness and past life recall. It will sharpen your perceptions of yourself and others. Garnet helps you let go of old, useless, or obsolete ideas. Will remove inhibitions and taboos and will open the heart and bestow self confidence.

Garnet regenerates the body and treats spinal and cellular disorders. It stimulates the metabolism, purifies and regenerates the blood, heart and lungs, and regenerates DNA. It assists assimilation of vitamins and minerals. It clears negative chakra energy. Both the thyroid and spleen may benefit from cleansing and purifying with Garnet.